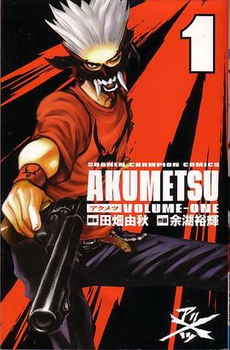 Are you ready for some awesome action-packed, somewhat cliched, thrilling, and definitely psychological adventure? Yes?

Akumetsu was one of the first manga under the genre “psychological” that I’ve ever read (sadly at the time, I didn’t know that it was psychological at all).  Even though I tend to avoid reading series that are filed under the “action” category a lot, I just couldn’t pass on this one. Especially not after the first three chapters. The humor’s there, the seriousness is there, and most importantly, the characters stand out. This was probably one of the very first series that took me away from the mainstream manga and into the new world of seinen, josei, and invisible– but not completely unnoticed series. The plot and how the author(s) seeing that there’s only a writer and an artist… decided to lay everything out in the first volume. The nice thing about this manga is that, even though it’s pretty long (18 or 19 volumes), it never lets go of your interest. Ever. Once you’re hooked, it’s over. If you ever decide to read this, make sure you’re not in an exam week or a very busy work period. (Note: This will make you twist and turn in your bed wondering about what’s going to happen next.) Although this was a very well written piece of work, I personally wouldn’t give it a complete 10/10 because well, in the middle, it sort of gets slightly confusing. Slightly. Not enough to make someone rage quit, but definitely enough to make you stop, pause, think back, and go “Wait. What?”.

While this series appealed to me a lot, I’ve never really recommended it to any of my IRL friends before. A big factor for my choice of actions is that, like I’ve mentioned before, this isn’t exactly your typical everyday mainstream shounen jump series. It’s a lot more deeper and it actually requires you to understand the plot fully. Of course, there were many times that I have over thought segments of the series, but nonetheless, the results were never disappointing. And like every medium length series out there, the middle does tend to go a bit down hill compared to the previous chapters’ intensity and excitement. But wait! Don’t just go ditching the series right there (like what I have done, in which I am shamelessly admitting here) because the drop is really just to calm you down from the previous tensity to get you prepared for what’s going to happen next. And then there’s the main character. He starts off like your average shounen teen guy, and of course, just like any shounen mainstreams out there, he changes, gets stronger, and becomes the badassed character that saves the day within a day, but the nice thing about it is that the character doesn’t really get out of character during the process. The change does get apparent in the later volumes when he begins to become aware of what’s really happening in the world.

Now, it’s pretty violent and there is this one chapter in the very, very beginning that states some very…. Explicit materials. But that’s about as far as it goes.

Nagasawa Shiina was just your average 3rd year high schooler when her parents’ company went bankrupt. In order to help pay the bills, she sells herself into prostitution. At her first job, a mysterious masked man crashes the party…and it’s someone she knows…